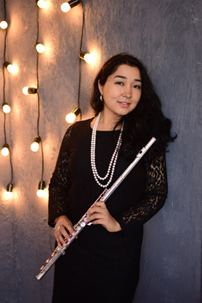 Nationality: The Republic of Kazakhstan

2016 – the present time Variety and Symphony orchestra of the mayor of Almaty, artist of the orchestra, concertmaster;

2011-2012 – The experimental school of arts at the Kazakh national conservatory named after Kurmangazy, flute teacher;

8. 2015 – internship at the Moscow State Conservatory named after P. Tchaikovsky in the class of Professor A.M.Golyshev (flute);

11. 2011 – master class of the soloist of the Mariinsky Theater Nikolay Mokhov (Russia);

13. Certificates for passing the refresher courses for teachers of Music School.

1. "Features of the methodology of teaching the teacher Viktor Alekseyevich Glebov." // Collection of articles by young researchers - Almaty, 2015;

2. "Flute performance in Kazakhstan: past, present and future". // Musical art in the modern world: materials of the scientific conference - Almaty, 2014;

1. "Flute", an educational program for music schools and music departments of the School (with 6 and 8-year term of study) - KNK named after Kurmangazy, "Modern School of Arts" . – Almaty, 2012;

2. "Flute", educational programs of the KDM and teenage departments of the Music School, KNK named after Kurmangazy, "Modern School of Arts" .- Almaty, 2012.

ORGANIZING AND PARTICIPATING IN CONCERTS:

2018 – co-organizer of the Summer Flute School with Yerzhan Kushanov;

2018 – the official representative of the organizing committee of the VII International competition - the festival of young performers on wooden brass and percussion instruments. Yu.N. Dolzhikov in the Republic of Kazakhstan;

2017 – concert for the anniversary of V.A. Glebov in the KNK after Kurmangazy;

2016 – concert of "The Works of Jan Clark for Flute" in the Republican Secondary Specialized School for gifted children named after K. Baiseitova;

2013 – co-organizer of the Republican contest of performers on wind instruments named after K. Zhumakenov;

2012 – co-organizer of the concert in KNK named Kurmangazy "To the anniversary of the flute class" with E.F. Breusov and O.V. Nesterova.

2014 – participation in the creation of the animated film "Anuar and Musa" at the Kazakhfilm studio, as a composer and performer on flute and recorder.

2017 – presently participating in the jam session with the Khomenkov Band.