The scientific program of the conference covers a wide range of problems in the field of studying traditional and modern musical art: history, theory and practice of studying, describing and publishing the heritage of the outstanding figure Abai, questions of musical poetics, theoretical aspects of researching the musical art of the past and present.

The main topics of the conference are: the fate of Abai legacy from the beginning of the 20th century to the present day, the role and significance of the composer's works in different decades in the context of the development of national musical culture, the legacy of Abai in the modern traditional concert practice.

The conference schedule includes sessions of the sections in the following areas of research:

•   Creativity of Abai in the context of musical culture of the XX-XXI centuries;

•   Musical-aesthetic and pedagogical views and principles of Abai;

•   The main artistic themes in the work of Abai;

•   Issues of the performing interpretation in music by Abai;

•   Kazakhstani composer heritage: the past and present.

In the framework of the conference, a section session will be dedicated to the 75th anniversary of the founding of the Faculty of Folk Music at Kurmangazy Kazakh National Conservatory: "Current problems and prospects of traditional music." The section program will be attended by leading teachers, performers, as well as undergraduates and students of the faculty. The subject of discussion will be various aspects of contemporary traditional musical art: problems of existence, development prospects, as well as issues of refraction of traditions in modern artistic practice.


The application for participation and full text of a report should be submitted to the Organizing Committee until October 15, 2020. It should include following information (in a separate file or in the text of the letter): the title of the report, full name of the participant, academic degree, rank, place of work or study, telephone number, e- mail address. Students, undergraduates and doctoral students also need to indicate their scientific adviser/consultant full name, degree, academic title and position. Before the conference it is planned to publish a collection of the articles.

There are no organizational fees. The Organizing Committee reserves the right to reject applications that do not correspond to the theme of the conference, norms of the scientific or creative ethics, or requirements for the reports. All participants, whose reports are accepted to the program, will be awarded by certificates.

Travel and accommodation are paid by the sending party.

Requirements for reports
The report for publication should not exceed 20 thousand characters (approx. 10 pages) including annotations and references. Format: document in Microsoft Word (with the extension *.doc, *.docx, *.rtf); font – Times New Roman, 12 pt in the main text, 10 pt – in the notes. Notes (references) should be on each page posing with using the “reference” option (ctrl + alt + f) in the “Word”. Line spacing single, all margins – 2 cm, full justification.

Paragraphs are indented 1 cm (but not using tabs or spaces); spacing between paragraphs - usual, font emphasis - italics. Article titles - UPPERCASE letters (center alignment). Before the heading - the Name and SURNAME of the author in italics, in ordinary lowercase letters, right justification, below - place of work, city and country. Further, in three languages, an abstract (abstract) of at least 80 words, which briefly describes the subject of research, the main methods and results.

Subtitles – bold, quotation marks are typographic «», inside quotes are ordinary like “”. Tonality should be written in Latin: C-dur, g-moll, names of sounds – Latin letters and italicized: h, G, a2. Dates are indicated by numbers: centuries – by Roman, years and decades – by Arabic.

Musical note examples, diagrams and figures should be inserted into the main text, and attached as separate files in any graphic formats (JPEG, TIFF, BMP, etc.).

The article should be concluded with an automatically numbered bibliography (with the “References” heading). Links to the mentioned sources should be placed in the text in square brackets, specifying ordinal number of the source in the list of references and page number separated by comma (Examples: [17, 25], [3, 36]).

Authors of articles are responsible for the accuracy and reliability of the information, quotations, references and bibliographies.

Articles not corresponding to the topic of the conference and the above- described requirements are not allowed for publication.


Text of the report and application for participation in the conference should be sent only in the electronic version at: knk.nauka@gmail.com. We kindly ask you to indicate as the subject of the letter the name of the conference “Spiritual heritage of Abai and urgent issues of the modern art criticism”. Deadline for submission of full texts is October 15, 2020. 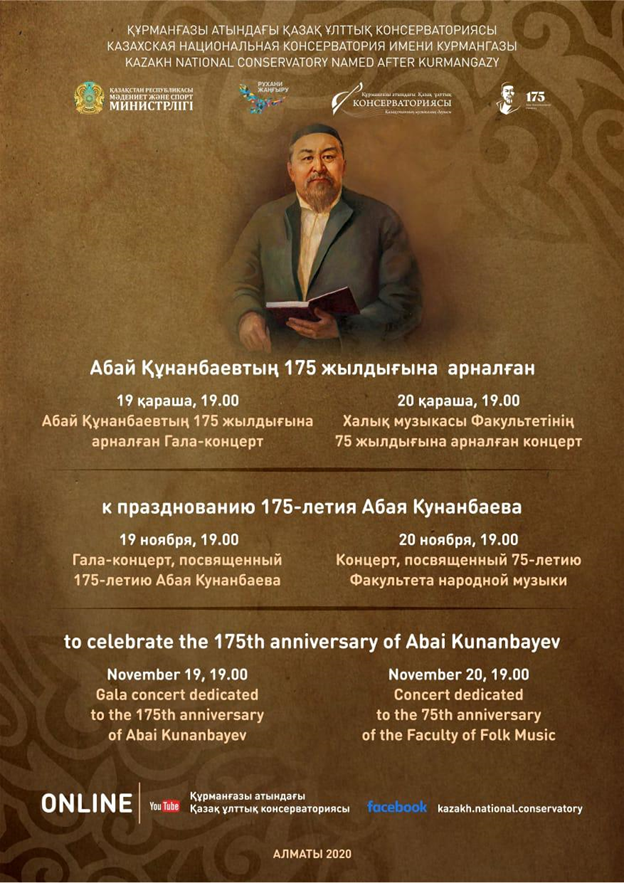